About Us | Fun Zoo Toys (India)

Founded in the year 1979, Fun Zoo Toys (India) is a family-owned and professionally managed company. Moving to year 1992, the company got itself registered under the name of ‘’Kridnak Udyog’’. Enhancing its operations, another unit of Kridnak Udyog was incorporated in the year 2003 at Greater Noida. In the year 2009, The company was renamed as ‘’Fun Zoo Toys (India). Fun Zoo Toys is one of the leading manufacturers and exporter of soft toys and home furnishing items. It is situated in pollution free atmosphere of Greater Noida, very near to international airport. Greater Noida is newly developed, well-organized industrial city situated on the border of Delhi, the Capital of India.

All the toys made at the company are absolutely non-toxic, non-hazardous as per the international standards for the domestic market. Attractive and creative toys are made of Cotton waste/Polyester fabric and stuffed with Polyester Staple Fiber (PSF). The toys are also rich in color, also the texture and unique designs have made Fun Zoo Toys the preferred brand of stuffed toys for children of all ages. The close attention to details and quality has made it one of the most successful brands within the industry. There stuffed toys are made after a close supervision. The quality measure begins at the very initial stage of designing. Funzoo is extremely particular regarding our quality and ensures that they meet international standard.

Toys are not just toys, for babies they are a part of their family.  A baby shares his feelings with his toys as he spends most of his time with them. We spend our time thinking about how we can make babies happy, so everything we have in mind is created with one specific purpose which is ‘Smile of Babies’. So make this blissfully never-ending FUN ZOO toy has been contributing to the field of toys manufacturing for a long time

In Early 1980’s,  M/s. Kridnak Udyog was founded in early 1980’s as a proprietorship firm by Mrs. Santosh Gupta under mentorship of her husband Mr. Naresh Kumar Gupta. The primary business of firm is manufacturing and trading of its soft toys under KRIDNAK, a premium range of soft toys brand. Certificate received from India Trade Promotion Organization (ITPO) for participation in a business fair at Pragati Maidan in year 1993 is one of the oldest proof for the existaence of Kridnak Udyog. After  1993 onwards, Media publication for advertisements of Kridnak Udyog by a third party (TAI) available where contact person is husband of Santosh Gupta i.e. Nareah Kumar Gupta proving that it is jointly managed business.

Between  1999 – 2000, M/s. Fun Zoo Toys (INDIA) was formed by Mr. Naresh Kumar Gupta – a proprietorship firm. This firm is a manufacturer, importer and a trading firm specializing into soft/plush toys. All soft toys are being sold under FUNZOO brand. Establishment proof available for the year of 2001. Year 2002 Third party media publication shows advertisement publishing of Fun Zoo Toys (INDIA) available from 2002 onwards. In Year 2005, Design Concept of MRP Tag in practice was further streamlined and standardized during the year 2005 by an expert designer. Invoice for the same is available for year 2005. An NOC in this respect is available dated Aug 2014 from the respective designer.

Between, 2000 – 2008, Now being a joint family business, each firm co-owned by husband (Fun Zoo Toys (INDIA)) and wife (Kridnak Udyog ), expanded to a PAN INDIA Level showing tremendous growth. Both the firms covered all market horizons together in support of each other. Business relations between both firms are being justified with recommendable numbers for purchase and sales between each other. Relevant documents are provided and shared.

Between, 2008-2009, To discover unexplored market synergies, Fun Zoo Toys (INDIA) and Kridnak Udyog were merged where Fun Zoo Toys (INDIA) proprietor closed his firm and all the operations, inventory and market area were merged with Kridnak Udyog under proprietorship of his wife Mrs. Santosh Gupta. This strategic movement further helped the firm to establish strong foothold over Indian market through inorganic growth. Possibility of Cannibalization of sales was also overcome by this strategic decision.

From  2009 onwards, Fun Zoo Toys (INDIA) business is growing at a steady rate under the leadership of Mrs. Santosh Gupta and Mr. Naresh Kumar Gupta. At present the firm has four brands – Kridnak, Fun Zoo, Lil’Ted. 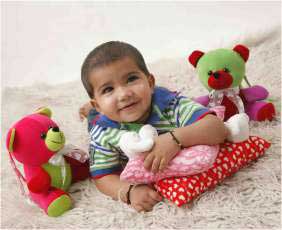 Toys help kids to improve their creativity & introduce the real world to them for the first time. This is all we do, we feel happy because we are part of the most beautiful memories of your kids.